Kombucha Sounds like some ancient Chinese medicine right? Well, this is because it is. Although it is just gaining popularity, this drink dates back 2000 years ago to ancient China. They called it the “Immortal Health Elixir” and apart from curing arthritis, they also believed it could prevent cancer. So, moving forward to the present is kombucha drink worth the hype it is receiving? Here is all you need to know before you make the decision.

HOW TO MAKE KOMBHUCHA
Kombucha is a fermented beverage made by adding a Symbiotic Colony of Bacteria and Yeast (SCOBY) culture to sugared tea. Although black tea is most preferable, the health benefits associated with green tea have made it a healthy alternative. The bacteria and yeast added in the sugared tea initiate the fermentation process and the concoction is then allowed to sit for 15-20 days. During this process, a mushroom-like blob of yeast and bacteria forms at the surface of the mix. This is why kombucha tea is also known as mushroom tea or munchurian mushroom. The new culture at the top can be scooped and used to make other brews while the beverage below is ready for drinking.

HEALTH BENEFITS OF KOMBHUCHA TEA
1. Rich source of probiotics
Since it is made from fermenting, it comes naturally that kombucha contains probiotics. The health benefits of probiotics are numerous ranging from a healthy gut to reduced digestion problems.
2. Kombucha contains antioxidants.
These are substances involved in detoxifying the body. Although no human-based evidence, studies conducted on rats have revealed that regular intake of kombucha beverage reduces liver toxicity by at least 70%. Definitely good news for people with liver conditions.
3. It is an excellent anti-bacterial agent
As funny as it sounds, kombucha can kill bacteria. The bacteria component in the SCOBY culture contains Gluconacetobacter xylinus that oxidizes alcohol produced to acetic acid. This acid is able to kill various harmful bacteria including two strains of salmonella and Campylobacter jejuni that are the most common causes of food poisoning in the USA.
4. Helps manage level 2 diabetes
According to research, kombucha slows down the digestion of carbs resulting to reduced blood sugar levels. It also improves liver and kidney functionalities. Of course, you should ensure that the beverage is consumed with low sugar load.
5. It reduces heart disease risk
Through rat studies, it has been proved that kombucha greatly improves the two markers of the disease, LDL, and HDL cholesterol.
6. It helps control cancer
Test tube studies have proved that tea polyphenols and antioxidants found in the organic kombucha prevent the growth and multiplication of cancerous cells.
In summary, apart from healing the gut, a well-confirmed body of evidence proves that kombucha drink can help treat various other diseases such as:
*cataracts,
*Gout
*herpes
*insomnia
*rheumatism
Its ability to boost the immune system has also seen it become popular among people with HIV and full-blown AIDS.

HEALTH RISKS ASSOCIATED WIHT KOMBHUCHA
Although the health benefits of this beverage are many, some people have reported to experiencing some side effects.
1. High acidity concentration in the drink may be harmful to the teeth. To prevent this, drink the beverage in one go and swish water in your mouth after you are done.
2. There is also a risk of contamination when homemaking this tea. It is therefore recommended that you use sterile equipment and clean your work area.
3. Another concern that has been raised is alcohol level present in the drink. However, the presence of Gluconacetobacter xylinus in the SCOBY culture oxidizes the alcohol component into acetic acid.
An important thing to note. pasteurizing kombucha tea kills the bacteria hence killing all the health benefits. 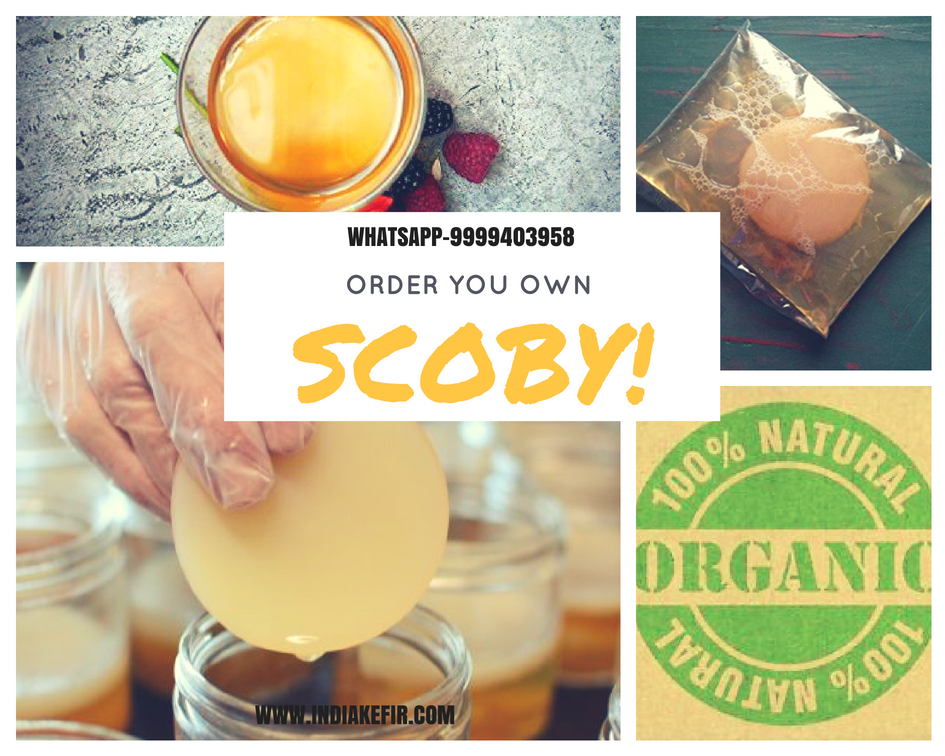 WELCOME TO INDIA KEFIR
WhatsApp
Open chat
Powered by
Hello, How Can We Help You